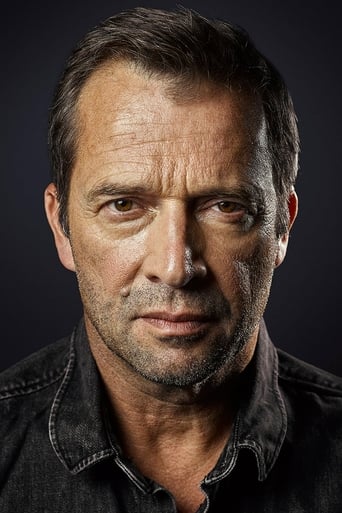 James Purefoy (born 3 June 1964) is an English actor. He played Marc Antony in the HBO series Rome, college professor turned serial killer Joe Carroll in the series The Following, and Solomon Kane in the film of the same name. In February 2018 he starred as Laurens Bancroft in Altered Carbon, a Netflix original series. He played James McCarthy, a young man accused of murdering his father, in "The Boscombe Valley Mystery," in Granada's The Case-Book of Sherlock Holmes. One of his notable roles was as Nicholas Jenkins in the eight-part miniseries A Dance to the Music of Time for Channel 4 in 1997. He played Edward, the Black Prince in the film A Knight's Tale, Rawdon Crawley in Vanity Fair with Reese Witherspoon and Tom Bertram in the 1999 production of Mansfield Park. He has played major roles in several television costume dramas, including Sharpe's Sword, The Tenant of Wildfell Hall, The Prince and the Pauper, The Mayor of Casterbridge, Blackbeard: Terror at Sea, Beau Brummell: This Charming Man, The Tide of Life, Camelot and Rome. He played Mark Antony in the HBO/BBC original television series, Rome. He starred as Teddy Rist in the summer television series, The Philanthropist, which aired on NBC beginning on June 2009. His character is a billionaire playboy who decides to use his wealth and power to help others in need. In 2013, The Following debuted, starring Purefoy as the lead antagonist of the series. He portrays Joe Carroll, a former professor who becomes a serial killer and leads a cult of followers, all whom help create Carroll's "story". It was announced in June 2014 that Purefoy would join the cast of the film High-Rise with Tom Hiddleston and Jeremy Irons. Later in 2014, Purefoy co-starred in the Formula 1-themed music video for David Guetta's song "Dangerous". In February 2019, Hybrid (who provided the score to Interlude in Prague) released a short film to accompany their single "Hold Your Breath" from the album Light of the Fearless. The film starred Purefoy as the brooding 'Mr Black'.