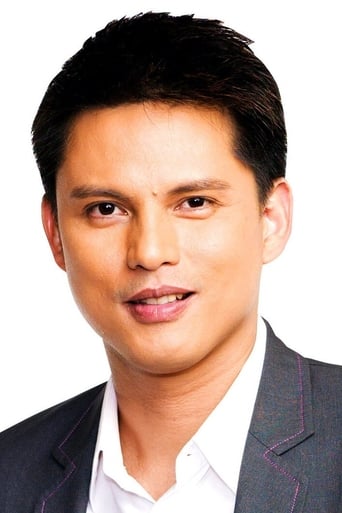 Zoren Legaspi (born on January 30, 1972 in Manila) is a Filipino actor and television director. Zoren comes from a family of Filipino celebrities. His father, Lito Legaspi, and brothers, Kier and Brandon, are all actors. His spouse, Carmina Villaroel, is a movie and television actress. They have twins, Cassandra and Maverick, born in the US. He was once a leading man of beauty queen/actress Ruffa Gutierrez who was his ex-girlfriend. He was a member of That's Entertainment as a matinee idol. He was nominated for a Best Supporting Actor Award for his performance in the movie The Fatima Buen Story in the Gawad Urian Awards of 1995. Zoren directs for GMA for television shows like Fantastikids, Fantastic Man, Wag Kukurap and Atlantika. He made his film director debut for Ultraelectromagnetic Love of Regal Films which was to be shown in 2008. He was a minor character in Agua Bendita aired on ABS-CBN. Zoren Legaspi returned to GMA with his partner Carmina on a new talk show, "Love Ni Mister, Love Ni Misis". This was Zoren's first hosting on TV and first talk show on GMA 7. The show premiered August 9, 2010. Zoren returned to TV5 as host in Paparazzi with his co-hosts Ruffa Guttierrez, Shalala, Christy Fermin and Mo Twister. This was Zoren's second hosting on TV after Love Ni Mister, Love Ni Misis aired on GMA 7 in 2010. Zoren returns again to drama via Glamorosa with grand slam best actress Lorna Tolentino and former Palmolive endorser Alice Dixson. The show premiered November 2011. On November 2012, Carmina and Zoren had their wedding, and the ABS-CBN had their special coverage of their wedding that aired November 24, 2012 entitled Zoren-Carmina: Always Forever, A Wedding Like No Other. The idea of a surprise proposal followed by a flashmob-style instant wedding was inspired by a remarkably similar episode of the U.S. television show "Mobbed" hosted by Howie Mandel.