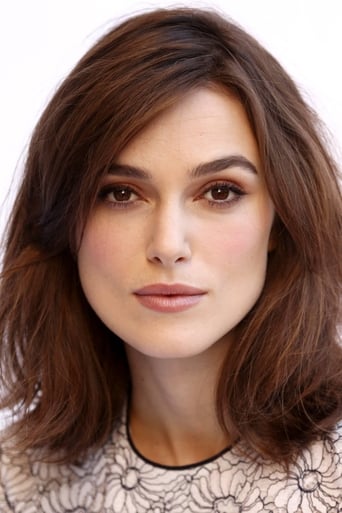 Keira Christina Knightley OBE, is an English actress and model. She began acting as a child and came to international prominence in 2002 after co-starring in the films Bend It Like Beckham and Pirates of the Caribbean: The Curse of the Black Pearl. Knightley has appeared in several Hollywood films and earned nominations for the Academy Award for Best Actress and Golden Globe Award for Best Actress for her role as Elizabeth Bennet in Joe Wright's 2005 adaptation of Jane Austen's novel Pride and Prejudice. Two years later she again was nominated for the Golden Globe Award for Best Actress, as well as the BAFTA Award for Best Actress in a Leading Role for her performance in Atonement. In 2008, Forbes claimed Knightley to be the second highest paid actress in Hollywood, having reportedly earned $32 million in 2007, making her on the list of highest paid actresses. Knightley was born in Teddington, within the London Borough of Richmond upon Thames, to theatre actors Sharman Macdonald and Will Knightley. Her mother is Scottish and her father is English. She was meant to be named "Kiera", the anglicized form of "Kira", after Kira Ivanova, whom her father admired. However, Macdonald misspelled the name when she went to register her daughter, writing the letter "e" before the "i". Macdonald also worked as a playwright after her career as an actress came to an end. She introduced her children to theatre and ballet at an early age. This furthered Knightley's interest in acting, and she requested an agent at the age of three. Knightley has an elder brother named Caleb. Knightley attended Teddington School. At the age of six, she was diagnosed with dyslexia but by the time she was eleven, with her parents' support, Knightley said, "they deemed me to have got over it sufficiently". She is still a slow reader and cannot read out loud. Knightley said she was "single-minded about acting" during her childhood. At the age of three, she expressed the desire for an agent like her parents and got one at age six. This led to her taking a number of small parts in TV dramas throughout her childhood. While growing up, Knightley performed in a number of local amateur productions, which included After Juliet, written by her mother, and United States, written by her drama teacher. She focused on art, history, and English literature while studying at the Esher College, but left after a year to pursue an acting career. This page is based on a Wikipedia article written by contributors. Text is available under the CC BY-SA 4.0 license; additional terms may apply.