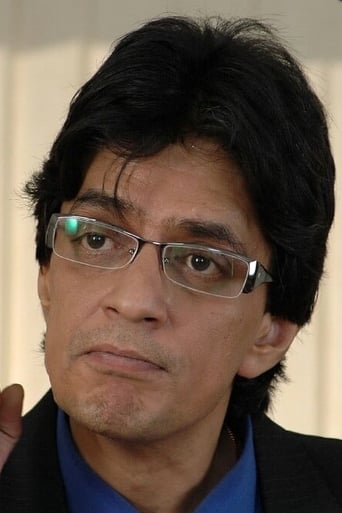 Raghuvaran was an Indian actor who predominantly acted in movies made in South India. He became famous for his portrayal of villain and character roles in Tamil films. He has acted in more than 150 Malayalam, Tamil, Telugu, Kannada and Hindi films. According to the Hindustan Times, "the actor had carved a niche for himself with his special style and voice modulation. He played the protagonist of a Tamil soap opera, Oru Manidhanin Kadhai, about a well-to-do man who becomes an alcoholic. He received critical acclaim for his role as Father Alphonso in the Malayalam movie Daivathinte Vikruthikal, directed by Lenin Rajendran and based on M. Mukundan's novel of the same name. Following his beginnings on the stage, and a Diploma in acting from Adyar Film Institute in Chennai, Raghuvaran approached many Kollywood studios aiming for performance oriented roles and finally got selected one as hero. The offbeat film named Ezhavathu Manithan (Seventh Man). directed by Hariharan won many awards, but not many offers for him. A few more films followed as hero like Oru Odai Nadhiyagirathu and Nee Thodumbothu released, but did n't became a huge success. But the villain role in Silk Silk Silk was noticed and the film's success opened the gate of offers for him. The villain act continued in films like Kutravaaligal, Mr. Bharath, Mandhira Punnagai and Oorkavalan. He appeared as hero as well as supporting actor in between releases as well. The major ones are Mudivalla Arambam and Samsaram Adhu Minsaram. In mid 80's Raghuvaran did many films as hero and most of them did good business as well. The films Michael Raj, Megam Karuththirukku, Kootu Puzhukkal and Kavithai Paada Neramillai helped to stabilize his career. The lawyer in Kaliyugam, the police officer in Thaimel Aanai, the rowdy with a golden heart in Kai Naattu, the honest Medical student turned Goonda in Kuttravali, the common man in En Vazhi Thani Vazhi helped Raghuvaran's market value as hero to reach greater heights. But his desire to try all types of roles, like supporting actor as well as villain simultaneously halted the progress as hero, eventhough he played hero roles in Vyooham, Kavacham and Anjali later. His supporting roles in Annanagar Mudhal Theru and Siva was well received too. In a career span lasting for more than 26 years, Raghuvaran performed each roles with his trademark mannerisms, often stealing the thunder from more established stars and even heroes. His magnetic baritone voice was an advantage and he modulated it to suit his variety of roles. He also set his own style of mannerisms and brought a distinct dialogue delivery and even changed his gait in many films. All this dedication won him more fans and helped his popularity graph soaring more higher. Raghuvaran died on 19 March 2008 cause of the death has been disclosed as organ failure caused by excessive alcohol consumption. His death occurred during the filming stages of several films, including the Tamil film, Kanthaswamy wherein Raghuvaran's performances were left unused and were replaced with Ashish Vidyarthi, which resulted in the film's delayed release.