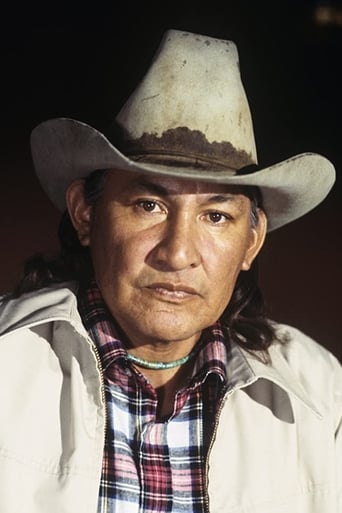 From Wikipedia, the free encyclopedia Will Sampson (September 27, 1933 – June 3, 1987) was an American actor and artist. Sampson, a Native American Muscogee (Creek), was born in Okmulgee, Oklahoma and was an imposing 6' 5" (1.96 m) tall. Sampson's most notable roles were as "Chief Bromden" in One Flew Over the Cuckoo's Nest and as "Taylor the Medicine Man" in the horror film Poltergeist II. He had a recurring role on the TV series Vega$, as Harlon Twoleaf and starred in the movies Fish Hawk, The Outlaw Josey Wales, and Orca. Sampson appeared in the production of Black Elk Speaks with the American Indian Theater Company in Tulsa, Oklahoma, where David Carradine and other Native American actors like Wes Studi and Randolph Mantooth starred in stage productions. Sampson competed in rodeos, his speciality riding bucking broncos, for about twenty years. He was on the rodeo circuit when the producers of One Flew Over the Cuckoo's Nest, Saul Zaentz and Michael Douglas, were looking for a large Native American to play the role of Chief Bromden. A rodeo announcer told them about Sampson, and after lengthy efforts to find him, they hired him on the strength of an interview. He had never acted before. Sampson was also an artist. His large painting depicting the Ribbon Dance of his Muscogee people is in the collection of the Creek Council House Museum in Okmulgee, Oklahoma. His artwork is currently displayed online by The Kvskvnv (“kuskuna”) Association. Description above from the Wikipedia article Will Sampson, licensed under CC-BY-SA, full list of contributors on Wikipedia.