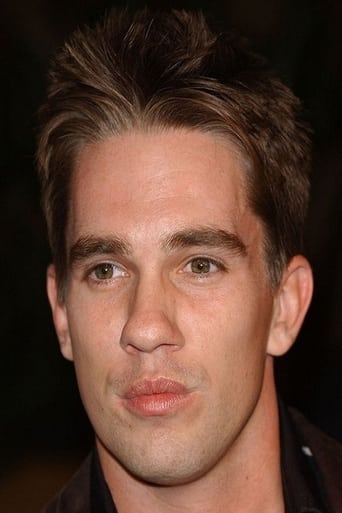 From Wikipedia, the free encyclopedia. Ross Patterson is an American film actor who has appeared in over 15 films including The New Guy, Accepted, and the 2006 Sundance film The Darwin Awards. Ross has also written, starred, and produced in five films, 7-10 Split, Screwball: The Ted Whitfield Story, Darnell Dawkins Mouth Guitar Legend, Poolboy: Drowning Out The Fury, and FDR: American Badass!, as well a pilot for MTV in 2007 entitled The Barnes Brothers which did not get picked up at upfronts. He was recently nominated for an MTV Movie Award for Best Spoof in 2008. Ross was a member of Kappa Sigma fraternity at Ohio State University in the late 1990s. He got his start in stand-up comedy by using a fake ID in Atlanta, Georgia when he was 16 years old. Ross can be seen as the fast talking hollywood music producer "Joey Zane" in the movie Garden Party opening July 11, 2008 in Los Angeles, New York, Portland, and Seattle. See the Garden Party website for more details. Patterson just finished filming Darnell Dawkins: Mouth Guitar Legend in January 2010. Film is based on the popular YouTube short film of the same name that has garnered over 800,000 views. He wrote, starred, and produced this film as well. He is currently filming the action-comedy "Poolboy: Drowning Out The Fury" starring opposite Danny Trejo, Jason Mewes, and Kevin Sorbo. "It's an unearthed lost movie from 1990 that the studio deemed too terrible to release, a Vietnam Veteran Sal Bando(Sorbo), tortured by his past as a Poolboy returns home to Van Nuys, California, and a country he doesn't recognize, in which it seems only Mexicans run pool-cleaning companies. Bando sets off on a brutal mission to reclaim his "rightful" vocation and enact revenge on the man(Trejo) who killed his wife and son."(according to IMDB) Screwball: The Ted Whitfield Story is due out October 1st through Warner Brothers. According to Production Weekly, Patterson is filming another film he wrote and is producing called "FDR: American Badass!" and is playing a role opposite Barry Bostwick(FDR) and Bruce McGill. Production started December 6, 2010 in Los Angeles and supposedly features the 32nd President of the United States riding a "wheelchair of death" to stop the world from werewolves who carry the polio virus, including werewolf versions of Hitler, Mussolini, and Emperor Hirohito. Description above from the Wikipedia article Becky Ross Patterson, licensed under CC-BY-SA, full list of contributors on Wikipedia.​