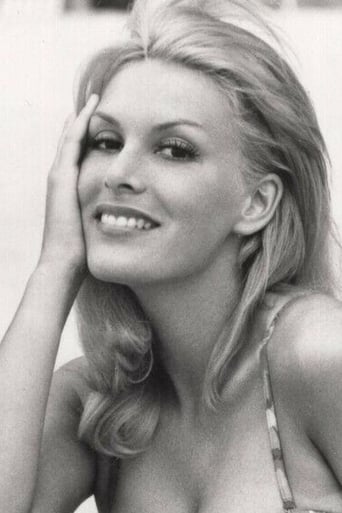 The British-born stunner was born on March 27, 1940 in Essex, England. Initially trained in dance (Sussex School of Dancing) to become a ballerina, she was performing on stage from age 12. The one-time brunette began as a topless dancer at age 15 and joined the legendary Windmill Theatre in London as a fan dancer in 1957. Discovered by Hugh Hefner within a short time, June came to America and first appeared in Playboy magazine in September 1958. Hefner rather unimaginatively but appropriately dubbed her "The Bosom." The tag stuck and enhanced her eventual transformation from a stunning brunette to platinum blonde in 1960. A sensation on the pages of Playboy, she appeared again in both August 1959 and November 1960, and in several other issues over the years, although she would never become an official "Playmate." Under contract to Seven Arts, her attempt at movie stardom. After being unbilled in such lowgrade films as Thunder in the Sun (1959) and Mr. Tease and His Playthings (1959), she was showcased in Career Girl (1960), the tale of a girl trying to make it in Hollywood. Subsequent romps in "Golden Age" turkeys like The Private Lives of Adam and Eve (1960), Macumba Love (1960) (her best known), and The Continental Twist (1961) sealed her fate as a serious movie actress. June, however, kept her name alive throughout the 1960s and 1970s in nightclubs, and on the live stage in such sex comedy teasers as "Three in a Bedroom," "The Ninety-Day Mistress" and "Will Success Spoil Rock Hunter?" via the dinner theater and Las Vegas hotel circuits. Her most successful vehicle was in "Pajama Tops," a show which amplified her still-gorgeous figure as well as her comedy timing. She returned to this well-received show quite frequently for decades and took it briefly to Broadway in 1963. She also appeared glamorously in such TV shows as "Batman," as the villainess Evilina, and "The Doris Day Show." In 1972, June married Dan Pastorini, the NFL quarterback for the Houston Oilers and L.A. Rams, who was known for his playboy-like reputation. He sometimes appeared as an actor in films and TV, and the couple appeared together in the film The Florida Connection (1976). They had a daughter, Brahna, before divorcing ten years later. A savvy, health-conscious businesswoman, her later projects have included running a successful string of fitness centers in Canada, hosting the Encore cable show "The Directors" in which she interviews filmmakers, and a historical fashion show called "Glamour's First 5000 Years." June recently made a rare film appearance in the low-budget western Three Bad Men (2005) with George Kennedy.