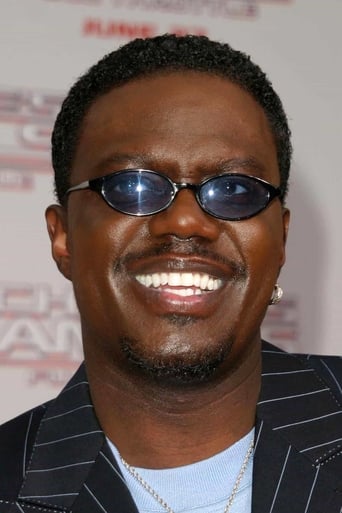 Bernard Jeffrey McCullough (October 5, 1957 – August 9, 2008), better known by his stage name, Bernie Mac, was an American actor and comedian. Born and raised on the South Side of Chicago, Mac gained popularity as a stand-up comedian. He joined comedians Steve Harvey, Cedric the Entertainer, and D. L. Hughley as The Original Kings of Comedy. After briefly hosting the HBO show Midnight Mac, Mac appeared in several films in smaller roles. His most noted film role was as Frank Catton in the remake Ocean's Eleven and the titular character of Mr. 3000. He was the star of The Bernie Mac Show, which ran from 2001 through 2006, earning him two Emmy Award nominations for Outstanding Lead Actor in a Comedy Series. His other films included starring roles in Booty Call, Friday, The Players Club, Head of State, Charlie's Angels: Full Throttle, Bad Santa, Guess Who, Pride, Soul Men, Transformers and Madagascar: Escape 2 Africa. Mac suffered from sarcoidosis, an inflammatory lung disease that produces tiny lumps of cells in the solid organs, but had said the condition was in remission in 2005. His death on August 9, 2008, was caused by complications from pneumonia. Description above from the Wikipedia article Bernie Mac, licensed under CC-BY-SA, full list of contributors on Wikipedia