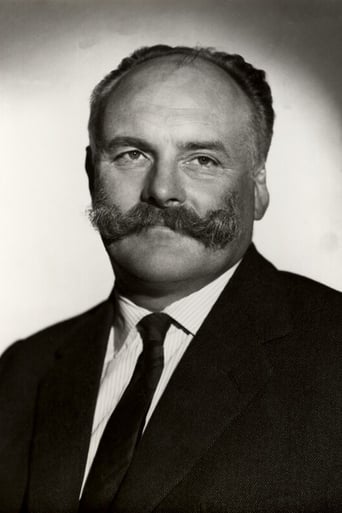 From Wikipedia James Keith O'Neill "Jimmy" Edwards, DFC (23 March 1920 – 7 July 1988) was an English comedy writer and actor on radio and television, best known as Pa Glum in Take It From Here and as headmaster "Professor" James Edwards in Whack-O! Edwards was born in Barnes, London, (then Surrey), the son of a professor of mathematics. He was educated at St Paul's Cathedral School, at King's College School in Wimbledon and at St John's College, Cambridge. He served in the Royal Air Force during World War II, earning the Distinguished Flying Cross. In December 1958, Jimmy Edwards played the King in Rodgers and Hammerstein's Cinderella at the London Coliseum with Kenneth Williams, Tommy Steele, Yana and Betty Marsden Bobby Howell was the Musical Director. In April 1966, he played at the last night of Melbourne's Tivoli Theatre. Edwards frequently worked with Eric Sykes, acting in short films that Sykes wrote: The Plank (1967), which also starred Tommy Cooper; alongside Arthur Lowe and Ronnie Barker in the remake of The Plank in 1979; and in Rhubarb (1969), which again featured Sykes. The films were not silent but had no dialogue other than grunts. He also appeared in the The Bed Sitting Room (1969) as Nigel, a man who lives in a left luggage compartment after being mistaken for a suitcase.