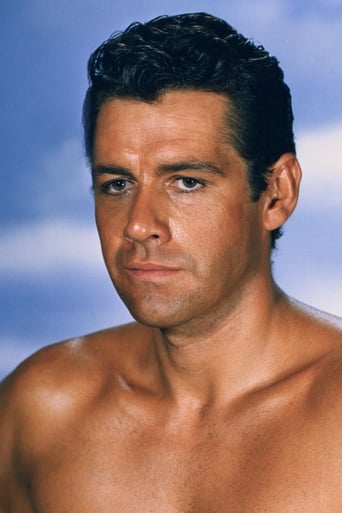 Gordon Scott was an American film and television actor known for his portrayal of the fictional character Tarzan in five films (and one compilation of three made-as-a-pilot television episodes) of the Tarzan film series from 1955 to 1960. Gordon Scott was the eleventh Tarzan, starting with Tarzan’s Hidden Jungle. He was "discovered" poolside, and offered "a seven-year contract, a loin cloth, and a new last name." "Due in part to his muscular frame and 6-foot-3-inch [1.91-metre] height, he was quickly signed to replace Lex Barker as Tarzan" by producer Sol Lesser. Lesser had Gordon change his name because "Werschkul" sounded too much like "Weismueller". Scott's Tarzan movies ranged from rather cheap re-edited television pilots to large-scale action films with high-production values shot on location in Africa. In his early Tarzan films, he played the character as unworldly and inarticulate, in the mold of Johnny Weissmuller, an earlier Tarzan portrayer. In Scott's later films, after a change in producers, he played a Tarzan who was educated and spoke perfect English, as in the original Edgar Rice Burroughs novels. Scott was the only actor to play Tarzan in both styles. Fearing he would become typecast as Tarzan, Scott moved to Italy and became a popular star in epics of the péplum genre (known in the United States as sword-and-sandal), featuring handsome bodybuilders as various characters from Greek and Roman myth. Scott was a friend of Steve Reeves, and collaborated with him as Remus to Reeves's Romulus in Duel of the Titans. Scott also played Hercules in a couple of international co-productions during the mid-1960s. As the péplum genre faded, Scott starred in spaghetti westerns and Eurospy films. His final film appearance was in The Tramplers (filmed in 1966; released in the United States in 1968).