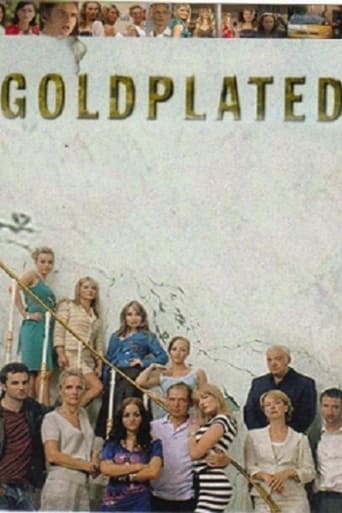 Goldplated is an eight-part drama series from World Productions which made its debut on Channel 4 on Wednesday 18 October 2006 at 10.00pm. It follows self-made businessman John White, as he struggles to complete a business deal that could be compromised by past indiscretions. Similarly to The Sopranos White's personal life is intertwined with his business life. He lives with his partner Cassidy, who is half his age, and their son, while in the process of divorcing his wife Beth. His oldest son Darren is his business partner, while his other two children with Beth also feature. Kenny Doughty also stars in 4 episodes as Cassidy's love interest. Despite a massive promotional effort that included a nationwide poster campaign featuring giant Gold Credit cards across Great Britain the drama fared disastrously in the ratings, drawing only 1.4 million viewers for its opening episode. Even though the series appeared to have a massive fanbase, the ratings figures dropped to half of that number over the following two weeks, prompting Channel 4 to shunt the remaining episodes to a late-night slot and to cancel Saturday repeats and 'first look' screenings on E4.