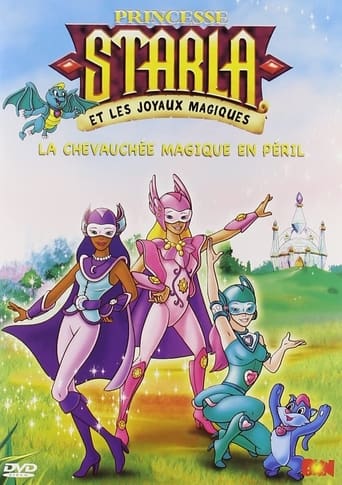 Princess Gwenevere and the Jewel Riders (1995)

Princess Gwenevere and the Jewel Riders is an American fantasy themed cartoon television series produced by Bohbot Productions and Hasbro with association with Hong Ying Animation in 1995. Each episode was constructed as an animated minimusical, aimed at children aged four and older. Internationally syndicated by Bohbot Entertainment, the international version has the title character renamed to Starla. There is a special emphasis on the "power of friendship", which enables the titular Jewel Riders, the three adolescent girl defenders of this enchanted kingdom, to overcome their adversaries. The show's action is set in the legendary island of Avalon, here portrayed as a fairy tale style utopia that keeps its magical energies in check with the aid of the seven royal Crown Jewels. The plot follows the quest of Avalon's young princess Gwenevere and her friends Fallon and Tamara to secure the scattered enchanted jewels, stop the evil Lady Kale from taking over the kingdom, restore harmony in magic and bring their mentor Merlin home. In the second season, the Jewel Riders receive more powers and new costumes; a new villain, Morgana, is also introduced in addition to the returning Kale, as is a new set of magical jewels to find. In the original version of the show, the title character has her name similar with Arthur's wife, Guinevere; other Arthurian characters in the show include Merlin and Lady of the Lake.