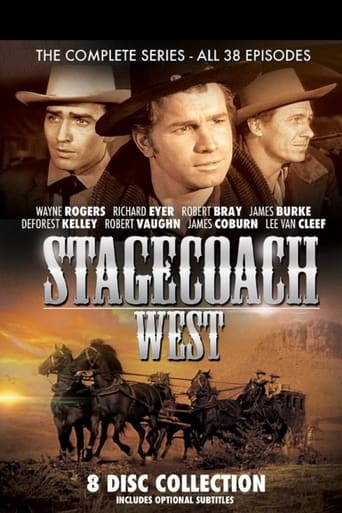 Stagecoach West is an American Western drama television series which ran for thirty-eight episodes on the ABC network from October 4, 1960, until June 27, 1961. Characters Luke Perry and Simon Kane operate the Timberland Stage Line from fictitious Outpost, Missouri to San Francisco, California. Simon's 15-year-old son, David "Davey" Kane, joins the two as they face stagecoach robbers, murderers, inclement weather, and human interest stories. Perry and Kane, who are both deputy U.S. marshals, had been on opposite sides of the American Civil War; Kane, a captain in the Union Army, while Perry had fought for the Confederate States of America. The one-hour black-and-white program was offered at 9 p.m. Eastern on Tuesdays opposite NBC's Thriller, hosted by Boris Karloff, and CBS's The Red Skelton Show. Rogers became well-known a dozen years later on M*A*S*H, and Bray later portrayed the forest ranger Corey Stuart on Lassie from 1964–1969, both on CBS. Child actor Richard Eyer had starred in a number of films in the 1950s, including Friendly Persuasion and Desperate Hours. Stagecoach West was produced by Dick Powell's Four Star Television. It is believed that the series was cancelled despite the high quality of its production because of the glut of westerns on television at the time that it aired. The same fate had fallen on CBS's Johnny Ringo, a 1959 one-season spin-off of Dick Powell's Zane Grey Theater.