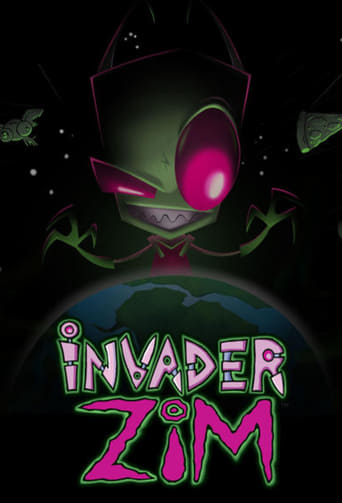 Invader Zim is an American animated television series created by Jhonen Vasquez. The show premiered on Nickelodeon on March 30, 2001. The series involves an extraterrestrial named Zim who originates from a planet called Irk, and his ongoing mission to conquer and destroy Earth. His various attempts to subjugate and destroy the human race are invariably undermined by some combination of his own ineptitude, his malfunctioning robot servant GIR, and a young paranormal investigator named Dib, one of the very few people attentive enough to be aware of Zim's identity. Invader Zim was targeted at children in their early teens, and met with critical acclaim, but after the first season, the show's ratings began to decline. Before the second season was completed, Nickelodeon cancelled the series, leaving at least twenty-three episodes and a planned television movie series finale unfinished. The show has maintained a cult following since the series' cancellation with a pilot, forty-six aired episodes, and about seventeen episodes that were in production around the time the series was cancelled. On August 19, 2006, all forty-six episodes have aired on television. Nineteen of the episodes are split into two individual stories, each lasting about twelve minutes. There are eight double-length episodes. All of the episodes were directed by Steve Ressel except for the pilot which was directed by Jordan Reichek.