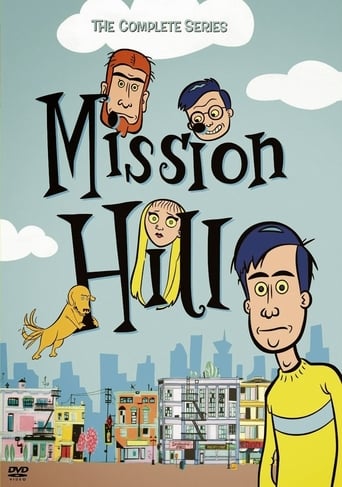 Mission Hill is an American animated television series that ran on The WB from September 24, 1999, to July 16, 2000, and on Adult Swim from July 14 to August 11, 2002. Although 18 episodes were planned, only 13 episodes were produced. The show was put on hiatus by the WB Network after two episodes due to poor ratings. It returned to the WB in the summer of 2000 but was canceled after four additional episodes. The show went on to develop a cult following, thanks to repeated airings of all 13 episodes on Teletoon's "Teletoon Unleashed" block, Cartoon Network's popular late night programing block, Adult Swim and Too Funny To Sleep, a late night programing block on TBS. Mission Hill was formerly known as The Downtowners, although MTV's production of the similarly titled Downtown forced a name change. It has also been popular outside of the United States and Canada, receiving broadcasts in Australia, Eastern Europe, Latin America, Spain and New Zealand. Stylistically, the series is recognizable for its bright, neon color palette, and features a peculiar mixture of modern animation and traditional "cartoonish" drawings.