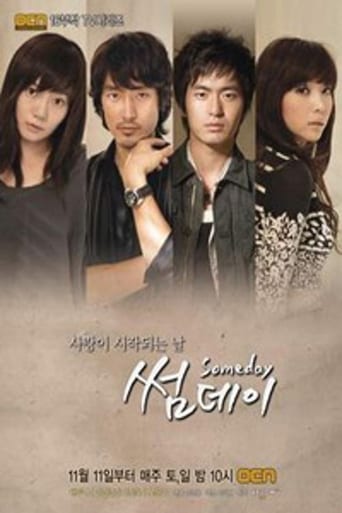 Someday is about four different people's story about love. Hana Yamaguchi (Bae Doo-Na) was a successful young cartoonist in Japan. Abandoned by her parents and brought up by her grandma, she was cold and aloof and did not believe in love which to her was only a simple biological response. When the elderly neighbourhood street sweeper died, she discovered the affection between him and her neighbour which lasted 60 years. Hana could not understand this kind of love, so she decided to trace her neighbour's footstep to Korea when she disappeared with her lover's ashes. Go Jin Pyo (Kim Min Joon) was a doctor who was a comic book fan of Hana. He was overjoyed in meeting Hana and believed that he was in love for the first time in his life. He decided to help Hana in fulfilling her wish to look for her neighbour and enlisted the help of a private eye, Lee Seok Man (Lee Jin Wook).Lee was the sole survivor of a car accident whereby his parents and brother were killed. He carried a lot of guilt towards the parents of the other victim and did his best to help out even at the expense of owing money to the loan sharks. Hye Young (Oh Yoon Ah) was a PD of animation projects and a close friend of Jin Pyo. she didn't realize that she was in love with him till Hana appeared.