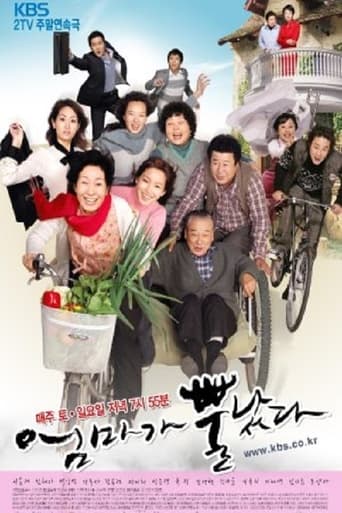 Mom's Dead Upset is a 2008 South Korean television series starring Kim Hye-ja, Lee Soon-jae, Baek Il-seob, Shin Eun-kyung, and Ryu Jin. It aired on KBS2 from February 2 to September 28, 2008 on Saturdays and Sundays at 19:55 for 66 episodes. The drama attracted record-breaking ratings, peaking at 42.7% on the September 21 episode. Kim Hye-ja stars as a middle-aged woman who rediscovers herself by taking a one-year break and declaring independence from her family after spending decades as a housewife looking after three children, a husband and a widowed father-in-law. Her performance won the Grand Prize at the 2008 KBS Drama Awards and the 2009 Baeksang Arts Awards.