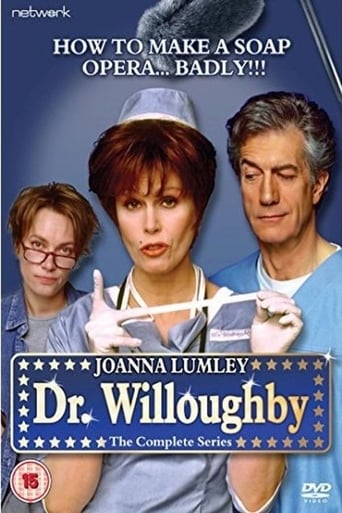 Dr Willoughby is a British sitcom broadcast on ITV from 14 November - 13 December 1999. The show was set on the set of a fictional soap opera, also called Dr Willoughby and followed the often over dramatic storylines and the personal lives of the cast and crew. Joanna Lumley plays Donna Sinclair, who plays the fictional part of Dr Willoughby. Donna is less than popular with her co-stars and her producer and gets less fanmail than anyone else, including new cast member Crystal and long standing co-star Ralph Whatman. Ralph Whatman is the male lead in Dr Willoughby and whenever Donna Sinclair has bad publicity or is heading for a fall he wastes no time in trying to make the show his own. Emma Goodliffe is the shows producer, unable to cope with the stress she is begging to be removed from the show. She is even heard in one episode to be applying for a job in a supermarket only to be told she is over qualified. Crystal is the new girl, she is receiving more fan mail than Donna after just two weeks on the show, something which Donna cannot stand. She demands that producer Emma remove her from the show but her request is rejected leading to Donna to advise Crystal not to wear a bra in order to put off her male fans.